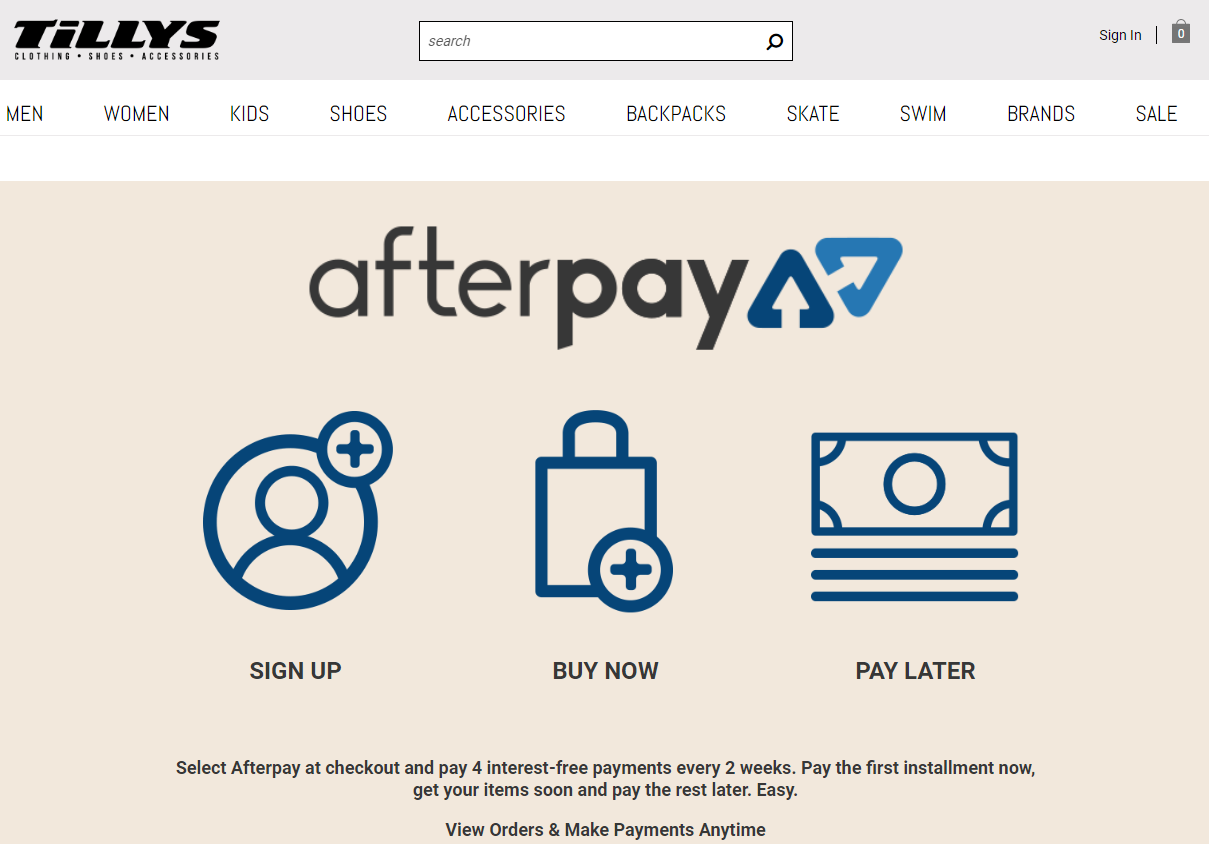 Founded in 1982, Tillys is an American retail company that was originally known as World of Jeans and Tops and Tilly’s. Headquartered and operated in Irvine, California, Tilly’s opened its first store in 1982 in Los Alamitos, California. They provide the best in men, women, and kids’ clothing, backpacks, shoes, and accessories from all of your favorite brands such as Nike, Vans, TOMS, Free People, G-Shock, Havaianas, and more. Tilly’s believe that you can be whatever you want, wherever you are.

Purchases made on the Tillys.com website allow using Afterpay. At checkout, simply select this payment option to have 4 interest-free payments every 2 weeks. After paying the first installment, shoppers can get the items and pay the rest later.

Avenue.com is a specialty retailer that is based in Rochelle Park, New Jersey, the United States. The company offers plus-size clothing to women who prefer or require to wear clothing that has larger sizes. It has operated in 33 states with 222 stores around the...

Cotton On was founded in 1991 by Nigel Austin. However, it was in 1988 where Nigel first made a sale by selling a denim jacket at Beckley Market in Geelong. Because the people loved his denim jackets, he decided to put up a clothing company where he opened his first...

n:Philanthropy was founded in 2014 by a fashion designer and a philanthropist Yvonne Niami. The clothing company is dedicated to making a difference not only to fashion but to the world. Together with her creative director Alexandre Caugant, n:Philanthropy offers...

Founded by Reese Witherspoon, Draper James is a retail brand that focuses on fashion, accessories, and home decor. This began by giving honor to her Southern heritage, particularly her grandmother makes the most of any outfit by matching them with an accessory while...

Born in St. Paul Minnesota in 2015, Proozy has been believing that success comes with a solid foundation. Having their strong midwestern roots and a team of great leaders, they have the passion, excellence, and integrity for providing the highest quality yet...

Started in 2019, Dash Outfitters is an online clothing retailer that offers casual, nightlife, and business wear for women. Their line of apparel and accessories ranges from a wide array of tops, bottoms, dresses & skirts, outerwear, and shoes. Customers can shop...

Garage, along with Dynamite are the brands under the global fashion retailer Groupe Dynamite. Garage began in 1975 in Montreal, Canada as a casual clothing provider for young, fun, and effortlessly sexy women, operating into 152 stores. Made to inspire confidence,...

Founded in October 2008, SHEIN is an international B2C fashion e-commerce platform that holds the “Everyone can enjoy the beauty of fashion.” philosophy. They provide the highest value trendy pieces of women’s wear, men’s apparel, children’s clothes, accessories,...